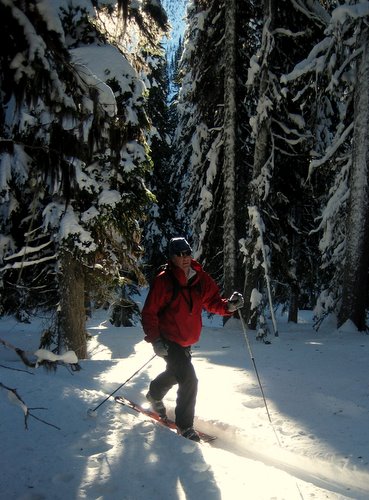 Anticipating a busy day at the Resort, Cam and I headed into the Rossland Range this morning for some turns in the sun. With a long moderate approach through the the quiet and empty forest, and easy travel conditions, it’s easy to get lost in your thoughts.

The final steep head-wall was wind effected in places, but very aspect dependent, and we were able to find creamy powder turns in gladed trees for the descent (my camera batteries were dead by then). There’s been significant avalanche activity on steep North facing alpine slopes, with some impressive debris piles, but nothing was moving today.  Doodling through the forest back down to the highway was fast and consistent, with great coverage considering the local snowpack is only just over a meter.

Getting the great skiing is usually about timing. Andrew, Brian, and I toured into one of our favorite back-country stashes just as the last of the warm wet weather was leaving us, setting us up for two cold clear days of perfect powder skiing. Many of the steep north and north-east facing alpine slopes had slid recently, but the cold temps seemed to consolidated things, and we were pleasantly surprised with the stability. Surface conditions were boot-deep easy skiing powder on all aspects. Here are just a few of my snaps.

Raining in Rossland. Wet snow at the base, snowing hard at the top. About 15cm of creamy new snow on the mountain. Very few skiers. Powder skiing on the top half (until the cliffs on the Slides), but getting heavy towards the bottom (better where it’s been skied). Finished up at noon – soaked but satisfied. Still pouring rain in town.

Given that a favorable snow report brings in business, there’s obviously a temptation for a all ski resorts to be a little careless with the truth. We still laugh about Red’s 50cm powder day that wasn’t, though to be fair I can also recall a few days when 10cm of fresh snow went unrecorded. Today I woke up a little later than usual, to a misty morning and about 1.5cm of wet snow in town. I was pleasantly surprised that the snow report advertised 8cm overnight, and had to rush to make first chair. Unfortunately it was damp and misty to the top, with no more than 2cm of heavy wet snow.  Guest Services suggested that wind might have piled snow up against their recording stick, but I just laughed and headed home for a more substantial breakfast.

We skiers spend so much of our life up in the snowy mountains. It’s our gym, our cafe, and our church. Two friends of mine were married ten years ago in a treed glade adjacent to the ski-hill, and yesterday a bunch of us gathered in the same spot, had a few drinks around a fire, and celebrated their time together, and this wonderful life we share.

The forecast was calling for a dusting, and there looked to be only a couple of cm on my truck, but it was snowing and the the snow report was advertising 13cm. It was  high density snow, but made for effortless powder carving, and with no crowds and the visibility getting better by the hour, I skied all day.

I don’t need a reason to go skiing. I go unless there’s a good reason not to. It was dark and damp in town this morning, and not very inspiring, but Jordy and I (and not too many others) spent the day ripping around the mountain, finding lots of left-overs from yesterday’s powder, and enjoying spectacular views and sunshine.

Orchards – if you look closely you can just see the summit of Red Mountain.

Searching for the perfect resort skis.

Another powder day at Red today, the best conditions so far this season. It was a little on the  heavy side (a few face shots that splatted onto my goggles), but not so warm as to get sticky, and deep enough (boot to knee) to slow you down on the steeps.  I brought out my rock skis for opening day, but when the skiing is this good, I want to be on my Huge Troubles. When I was shopping for skis I knew I wanted some that would float through anything (110mm under foot), smear effortlessly when I need them to (neutral camber), and yet carve like a GS ski in firmer conditions (damp wood core with lots of side-cut), and they do it all.  I initially mounted them with Marker Dukes, figuring I’d use them for occasional side-country touring, but found the Dukes were impossibly heavy, a misery to tour with (I’m used to Dynafits), were actually difficult to get in and out of, and raised me too high off the skis. So I sold the Dukes, mounted some light and simple Salomon z12s, and couldn’t be happier.