Andrew on the Summit of Kututle

Just back from a couple of days ski touring out of the Yurtopia Yurt in the Nelson Range.  Andrew and I covered lots of ground and managed to ski off the summits of Kututle, Ymir and Seaman Peaks.

Looking back towards Kututle and Seaman from Ymir Peak

Dropping-in to the North East off Ymir Peak 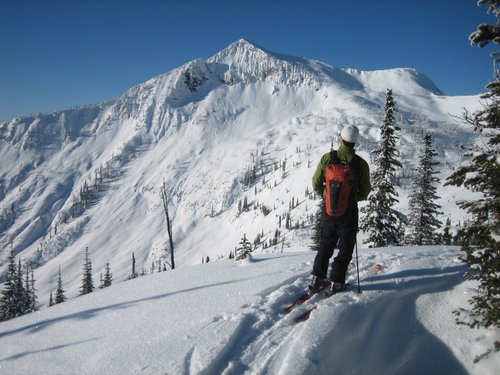 Scoping Lines on the North Face of Seaman

With stable hoar frosted powder and perfect visibility we were able to pick off a few aggressive lines.

About to drop in to my line. 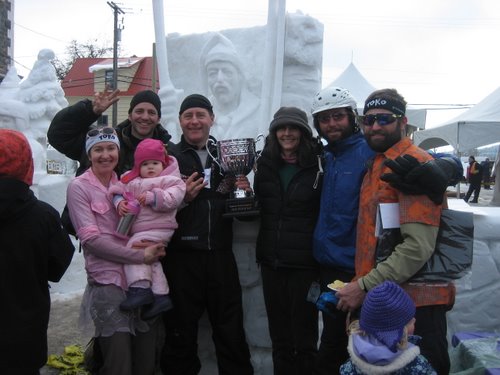 With so much going on this past weekend in Rossland, I was only able to participate in a small part of what was on offer. The Double Dees asked me to take on their mountain biking leg  for the Annual John Heintz Memorial muti-sport relay race, and were victorious for the third year running. John was one of the founders of the Red Mountain landmark Red Shutter Inn, and prominent in the local skiing community.  His widow Hanna (center right) presented the trophy. 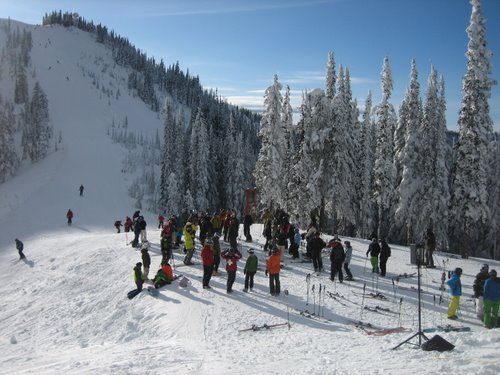 Captain Jack Carey was a relative newcomer to the Red Mountain skiing community, but his with his distinctive long beard, New Hampshire drawl, and gregarious nature, he made his presence felt. He died this past summer in a road biking accident, and the Red Mountain ownership group put together a celebration of his life for family and friends from all over. We gathered at the base of Buffalo Ridge on a spectacular afternoon – unseasonably warm clear and windless, the speeches were sincere, and we joyfully group skied the run cut and named in Jack’s memory.

Having driven and skied passed it numerous times, I’d long imagined skiing off the dramatic eastern Camels Hump at Kootenay Pass.  After a day of perfect powder skiing, Andrew, Jordy and I hopped our way down the northern face on our last run of the day.

With clearing skies I headed back again yesterday with Derek and Dave to enjoy some long open lines in the sun. Here’s a compilation of the short videos I shot with my pocket camera.

Looking north – lots of great skiing (other than the closures).

On Sunday we headed north from Kicking Horse Resort into the easily accessible backcountry. I don’t pretend to understand some of the bizarre closure policies in this area (seemingly Purcell Heli-skiing making a very long winded point), but once beyond the area boundary there seemed endless tempting options.

D’Arcy McRae died in a climbing accident in 2004. I’d skied with him quite a bit when he called Rossland home in the 90’s, and it good a see that his memory is being kept alive in the Kicking Horse backcountry. 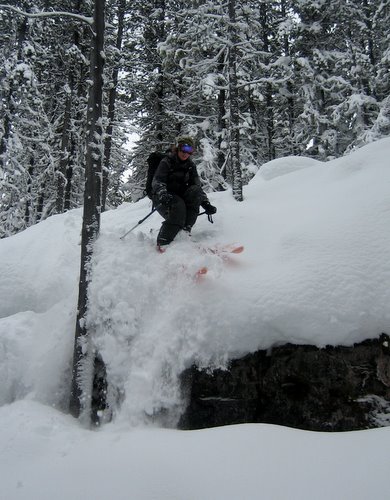 We skied a open glade line to the south, and then an avalanche path down the eastern aspect to the resort base. Some clearing in the tight trees would make for some incredible continuous lines , but in the perfect powder conditions we had a pretty fun time of it.

Kicking Horse at its’ Best

I lucked into a spectacular day at Kicking Horse on the weekend. We woke Saturday to 32cm of fresh snow and sunshine in the mountains. A dark start got us into the first Gondola, and some back-country quality skiing in the CPR chutes, in warm early morning light down Blue heaven, and from Fuez bowl all the way down Raceface to the base. 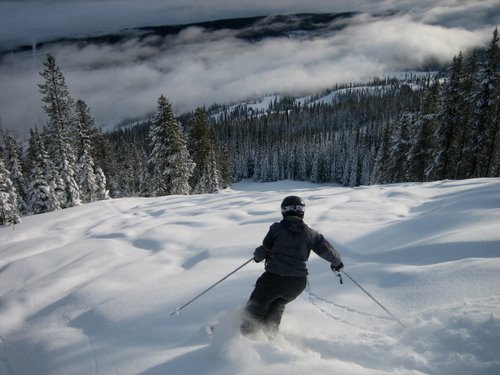 The line-up appeared huge all day, but actually didn’t take so long, and I kept finding fresh lines (especially in the trees) till the end. 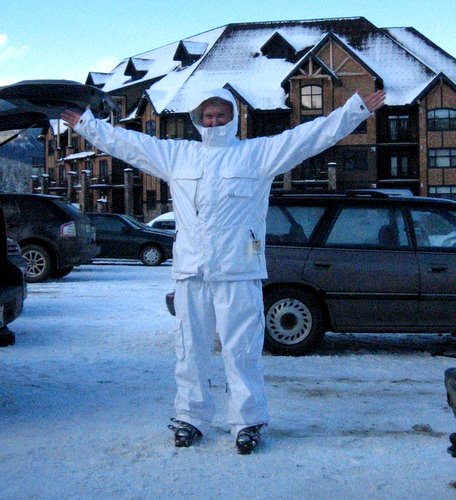 As I spend most of my time hiding out in the lower than low-key West Kootenays,  I was getting a kick out of all the extravagant personal styles on show. Groups of girls in bold bubble-gum colors, lots of fur accents, guys dressed to conquer Everest, or DJ a show. Mr White was dressed entirely in vivid white (he’d hate Red’s old grease dripping chairs), with white helmet, and even dyed white hair.  We pulled a paparazzi style drive-by in the parking lot, and he got a laugh out of it.

Warming at the Pass

Warm wet weather has arrived in Kootenays. We toured in the Twin Lakes area off Kootenay Pass yesterday in mild cloudy conditions. The snow was getting heavier by the hour, and though lots of fun on the steep pillow lines we skied, by the end of the day pin-wheels were forming, tree bombs were dropping, and the snow was wet at lower elevations. We didn’t see any signs of concern regarding stability (other than the warming), though friends skiing off the Camel’s Humps reported pocket releases and whoompfing on the hoar-frost. 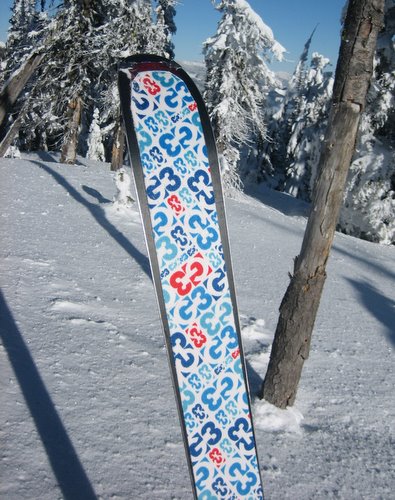 I used and loved purple Ascension skins for many years. When they were bought out by Black Diamond a few years back, I stayed loyal, but I didn’t appreciate the changes. My yellow Ascension/Black Diamond skins gripped like the proverbial shit to a blanket, but the poor glide was unacceptable – they made striding inefficient, and short downhills extremely awkward. they were bulky,  the cable tip attachment system wore out rapidly, and even the storage bag provided was too small. I needed new skins. I’d had a bad experience with G3’s first generation skins (they hadn’t dialed their glue recipe) but I’d been hearing good things about their Alpinist skins, so gave them a try.

I bought straight 100mm skins, which provide more than adequate coverage on my 102mm waisted K2 Coombas.  After trying trimmed skins, I find straight skins are much easier to fold, and less prone to glue contamination. Being unadjustable at the tip, the skins were purchased in a fixed length, which seems to work well on my skis. I’ve long been an advocate of the rat-tail (sewn-on webbing and bungy cord) but the proprietary tail attachment system on these skins is simple and effective. I have concerns about the durability of the elastic material, but only time will tell. I think the the large scalloped tail notch on my K2 Coombas helps keep the skins securely in place, and the only time I’ve had the tails come off was when kicking my tails into well consolidated snow (when pulling the ski tail out of such snow the elastic tail can be pried off).  The two clips which attach the tip of the skins look pretty distinctive, high tech, and low profile. They’ve worked flawlessly thus far, and I hope they prove durable. The skins grip as well as necessary, and glide beautifully. I now look forward to short downhills, where I can pick up a bit of speed and sometimes even throw in a turn or two. The glue sticks well in all the conditions I’ve encountered, is reasonably easy to pull apart (a non-stick strip down the center may be helping), and appears to be in as-new condition after about 20 days on snow. The skins pack small, and come with a stuff sack that is light-weight, easily accommodates the skins, and opens without issue. G3 seem to have paid attention to all the details, and I’m totally stoked with my new skins.

The most popular and regularly skied terrain at Wildhorse cat-skiing is the area we call Perfect Glades. Yesterday they were doing justice to their name.  The snow quality was high on all aspects, and generally pretty stable, though unsupported rollovers at tree-line on northern aspects were releasing in pockets on the hoar-frost layer at about 40cm.

Lifts Down at Red

Are we really going to skin up Long Squaw?

It was quite the day at Red today. Another 8cm of snow overnight, making 59cm in the last week, and a forecast for clearing skies. The tragic news of a skiing fatality in the local mountains the day before had me extra curious to check out conditions in the back-country, and we’d already dropped a car on the Cascade highway, but  planned to ride the lifts for the morning.   A big and excited crowd had gathered for opening. I was halfway up the T-bar when the power went out. I looked back down through the mist in time to see and hear a cascade of brilliant blue explosions (like something out of a Sci-Fi Movie) in the transformers around the base lodge. The gossip amongst the skiers was that a staff member, felling a snow-laden tree adjacent to the power lines,  had inadvertently triggered a short circut of some kind, but I’ve heard no official account. The Silverlode chair was unaffected, but the rest of the lifts were down. We were told it would be dealt with within a couple of hours, but it was obviously a more serious problem, and we changed into our touring gear,  skinned up Long Squaw (Rino’s), and continued on with our day. 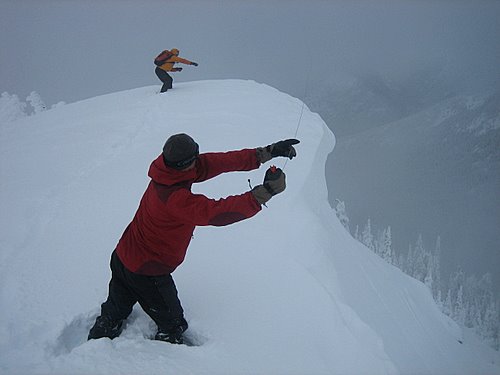 Cam had recently purchased a backcountry bomb , and  put it to good use cutting the cornices on Record. It more difficult than we imagined to get the cornices to drop (even when cut through), but we dropped a couple of large chunks, and felt a lot better about the slope stability because of it.

We skied the North and then the Western aspects of Record Mountain in light boot-deep powder. 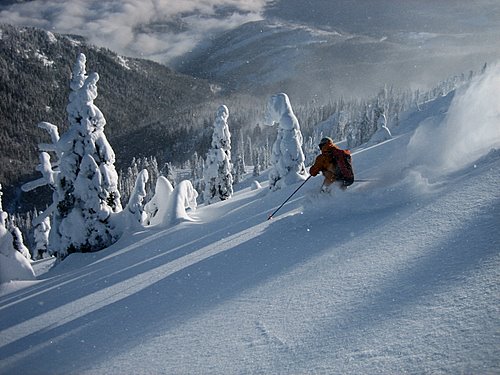 Trail breaking was slow trenching out towards Record Ridge and the Field of Dreams. The wind was howling, but the sun was shining. We were all trying to think up superlatives for our run down the Field of Dreams – a classic long and open line with absolutely perfect snow, coverage, and light, and a fast ski-out to the car. 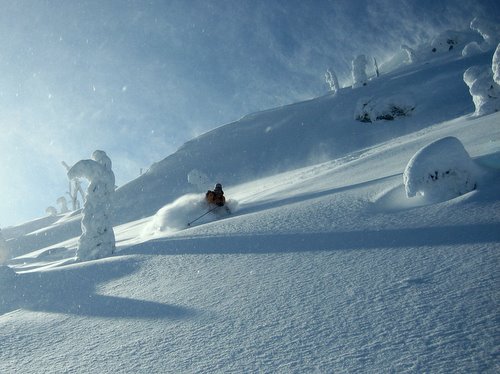 A novel use for the Pennywise.

A skier must be adaptable. Facing the challenge of a misplaced boot tongue and an approaching deadline for catching last chair in order to attend our New Years Eve celebration atop Granite Mountain, Craig substituted a folded copy of the Pennywise magazine. Apparently it provided a moderate even flex and effective snow-proofing.

Skiing Rino’s (Long Squaw) is never as much fun as in the dark with 10cm of fresh (and falling) snow. After stopping in for a high octane rum and coke at the Yodel-Inn, Elise and I made it back to Rossland for some GT-ing on the snowy streets.

2010 started with two (busy) powder days in row, and more celebrating with friends and family. With the holidays now over, and more snow on the way, I expect that lots of fresh lines are in order.