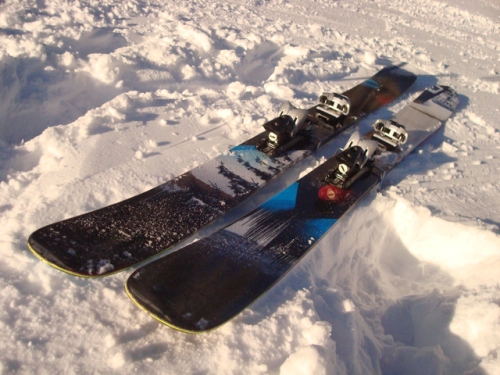 Of all the new models released of late, these are the skis I’ve been most curious about. Pre release reviews have been gushing, and it from what I’ve read they seem targeted at exactly the type and level of skiing that I do. So about to jump on the lift for yet another day of powder skiing at Red, I was stoked to see a pair in my size (192cm) available for demo, and with a minimum of fuss I got to take them out for half a dozen runs on Granite.

They’re long and fat (122cm waist), light weight and soft flexing, with a pronounced rocker at the tip and tail. From first turn to last they were easy and predictable. On the limited amount of groomed snow that I skied, they carved relatively short turns with a soft smooth railing sensation characteristic of Salomons. In open powder they danced through turns of any radius, and when it got tighter and steeper they whipped around the tightest of arcs with the subtlest of initiation. They were light and fun, and are my favorite of the bunch of new model skis I’ve demoed this year.

However because they’re so soft I found it easy to over ski them with my usual aggressive angulated technique. Channeling my inner jibber I found that a centered body position and rather passive technique worked best, though above a certain speed I felt that I was skimming rather than carving, and I couldn’t ever really get into top gear. In smooth consistent snow I didn’t have any problems, but they’re deflected by heavy and inconsistent conditions. In situations like lumpy high speed run-outs and cut-up crud on groomers I had to adopt a bit of a survival stance, whereas on my regular boards (185cm Dynastar Sixth Sense Huges) I’d just rail through that shit without thinking.

In conclusion I think Salomon are onto a winner with Rocker 2, and should cut in to sales of the popular Rossignol S7s and Armada JJs at places like Red Mountain. They’re a perfect do everything ski for most intermediate to advanced off-piste skiers, but (like the aforementioned skis) are just too soft for real charging. I still haven’t found anything that can compare to my beloved Dynastars.