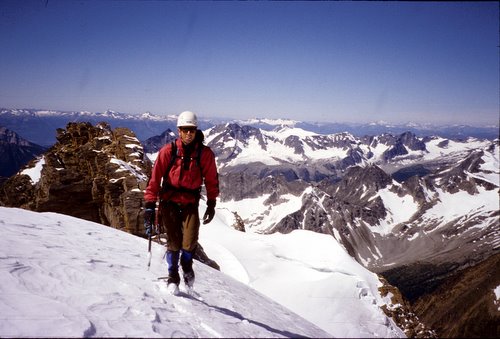 Summiting Jumbo Peak, circa 1998.
So Jumbo has finally been approved. I first read through the multi-volume development plan for the proposed Jumbo Glacier ski resort development in the early 90s. Looking at it through the critical eyes of a skier it seemed even then a kitsch fantasy of rich Euros cruising down glaciers in the sunshine. It was easy to dismiss as the doodlings of an eccentric old man looking to create a legacy, rather than a blueprint for a viable ski resort. Since then this high profile issue has attracted an array characters and interest groups looking to manipulate it to their advantage – reactionary pro-development politicians looking to enhance their right wing credentials, career environmentalists stirring up public anxiety on the thinnest of grounds, marginalized indigenous rights activists weaving a fable of spiritual dominion, existing tourism operators positioning themselves for compensation, and self-serving business types lining up on either side of the issue according to calculations of anticipated gain or loss. The whole bill-board littered area has already been exploited so shamelessly by hordes of cashed up and ethically bereft Albertans, that what is really just another real estate scam almost certainly doomed to failure (given the demographic prospects for ski resort real estate over the coming years), does not particularly surprise or concern me. Anybody crazy enough to invest in this debacle deserves to get fleeced. If I was one of the small number of people who actually live and recreate here I’d be royally pissed (and I wish them all success in their efforts to derail this thing), but these mountains and valleys are already logged to shit, over-run with commercial snowmobile tours and heli-skiers, and so hold little appeal to me. Given the relative insignificance of this proposed development compared to any number of examples of our shared environment being exploited for private gain (urban sprawl, endless clear-cuts, open cut coal mines, dammed valleys, commercial fisheries, fracking, tar sands etc.), I suspect most people getting worked up over this of another agenda, or no sense of proportion. My concern is to limit the public’s financial exposure to this private folly, and to not get distracted from the fundamental and systemic problem – the BC (and Federal) government’s evisceration of the public sector’s capacity to meaningfully manage the private exploitation of public resources in the public interest, and their complete disregard for the value of public recreation on public land. Jumbo is just a symptom.