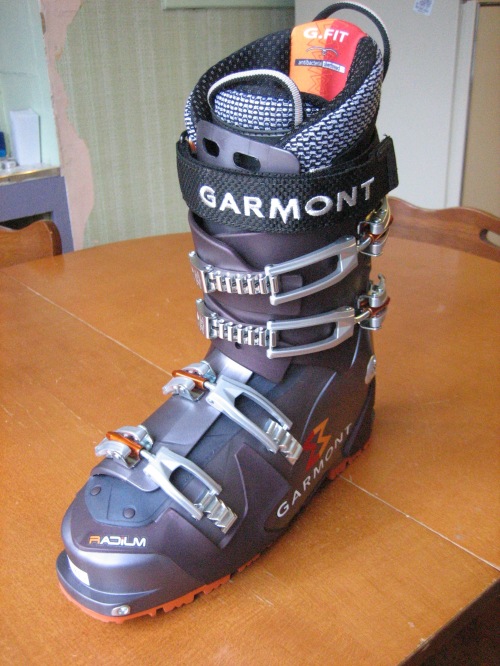 I just picked up my new Garmont Radium ski-touring boots from Gerick’s in Nelson, and spent the evening fitting them and walking around the house. I can’t wait to try them on snow. I’m coming from the Garmont Megaride, and these are noticably more supportive, with refinements in the shape of the shell that provide a more even fit. I like the locking buckles, and Garmont are claiming that the new liner will resist packing out, but only time will tell. I was concerned that the overlap design might make for difficult entry but it’s certainly not an issue in my kitchen, though snowcamping at minus 20 degrees wil be the real test. I created a new toe cover to use in the molding process (baking them in my oven on an old bread board) – using a neoprene koozie (beer cooler) with additional padding on critical zones – and seem to have acheived close to a perfect fit.

With only 25cm of snow at the top of Granite, and perhaps 45-50cm in the Nelson Range, I’ve been cruising the internet to see who is actually getting any of the white stuff.  Revelstoke is opening today with 80cm on the upper slopes (they’re advertising early season conditions), and there’s 145cm in the alpine at Roger’s Pass (but still thin down low). Lake Louise is open with 80cm, Sunshine with 60cm and Whistler with 50 cm. In the USA, it’s dumping in the East, a few Utah resorts are open with 50-80cm, while only Mammoth seems to be doing well with 125cm. There’s 80cm at a few resorts in Hokkaido (Japan) while in Europe, Chamonix just had a 40cm dump to make 100cm up high (the Grand Montet opens on the 29th) , while Eastern Switzerland and Austria seems the place to be, Engleberg has 150cm, St Anton 150cm, and Andermatt  a whopping 210cm.

The NorthEast Washington forecast (the most detailed  available for this area)  http://www.wrh.noaa.gov/forecasts/display_special_product_versions.php?sid=OTX&pil=AFD mentions the potential for valley snow early next week. Bring it on.