It’s nearly the end of March, there’s still over a meter of snow in my yard, and we’re still skiing cold, dry powder on the ski hill. It seems we’re not going to be getting any Spring skiing on the hill this year, and it might be a late start to the biking season. It snowed heavily all through the day yesterday, and I rode the Red Chair until it closed at 5.00pm (thanks to management for the positive change) , each run better than the last. After closing, I had my appetite sated at the reincarnation of the annual Turkey Roast. It was great to see a whole bunch of old and new faces participating in a real community celebration. Today was more powder skiing in the sunshine. Unfortunately I lost and never recovered a ski while skiing the Waterfall about half-way through the day. I went back on my touring skis and poked around, but it seems I’ll have to retrieve it sometime this summer. I’m not too concerned, as the skis were de-laminating and the the bindings kept pre-releasing. I’ve other skis I can use for the last few days, and I’m already considering what new set-up I’m going to purchase for next year (Scott Pures or another pair of Coombas). I did a lap on Mt Roberts in the afternoon, but found the Knife-edge into Center Chute surprisingly wind-effected. Skiing was much better on the hill. There’s more snow in the forecast, but I’m hoping it lets up soon, so that conditions can settle for our up-coming ski traverse, otherwise we’re going to be in for some energetic trail breaking. 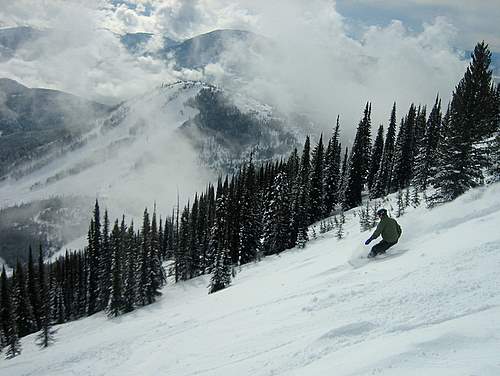